ONE GOOD EXAMPLE IN DELTA STATE 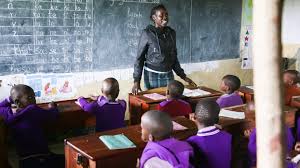 Undoubtedly, one of the most visible policy thrusts of the Obansanjo administration is his anti-corruption crusade. The initial focus of the crusade was the military looters and their bureaucratic collaborators. Due to the staggering and mind-boggling size of these loots, public attention was understandably arrested.

This short piece, however, explores one of the stupefying dimensions of moral cracks in several less visible but significant facets of the Nigerian society. I refer to an aspect of the social system where fraud is least expected – the educational system.

Like other developing countries of Africa, the Nigerian educational system is confronted with numerous problems. These include infrastructural decay, inadequate conditions of service for teachers and resultant teachers’ apathy, youth violence, cultism and psychedelic culture. Most students prefer to lay about, averse and indifferent to learning. Parents fail to buy books while governments fail to provide basic infrastructure such as classrooms, chairs, desks, register, and chalk.

Dimensions of the problem

For samplers, let us take a few facts from primary schools, examination bodies and tertiary institutions.

For up to 50 percent of primary school leavers, the primary school system fails to achieve the objectives of inculcating in them, basic literacy and numeracy. Inability to read at the end of primary school course is a great source of frustration in secondary and tertiary schools. Such students therefore seek deviant means of achieving academic success.

According to the Pro-Chancellor of the University of Lagos, Chief Afe Babalola, SAN, students, teachers, invigilators and school proprietors collude to cheat during examinations conducted by Joint Admissions and Matriculations Board (JAMB). The result, said Chief Babalola, was that dullards scored 300 and above while brilliant, hardworking student hover around 250. Chief Babalola said that during post-JAMB screening at the University of Lagos, almost all students whom scored 280 and above failed to show up for the test.

In April and May 2001, the authorities of Ambrose Alli University, Ekpoma, Edo State, identified over 10,000 students who were found to be unqualified to be students in that University.

In all probability, these undergraduates did not start their academic fraud in their various universities. They had their apprenticeship at lower levels of educational ladder. Therefore, any realistic and systematic analysis of examination malpractice must look further to unravel the genesis of the problem.

Let us consider for a moment the vast array of human and material resources devoted to education by government, voluntary agencies and parents. Consider fees paid by students, salaries paid to teachers to teach them. Consider infrastructure and other resources wasted. It is disheartening to contemplate that all these could translate into one huge and grand social deceit.

What are we saying? The educational system and policies tend to replicate within its structure and administration, social values, political structures and trends. Therefore, it would have been a great miracle if the educational system had been devoid of the massive force and fraud, which characterized the political structures in Nigeria. A certificate fails to certify what it portends when it is acquired through examination malpractice.

A voice in the wilderness

In spite of the degenerate social system, it is heartwarming to observe a growing number of high government officials who are joining the crusade for transparency, justice and discipline in our national life. All patriots, well-meaning citizens and organizations should maintain keen and abiding interest in the efficient administration of the state and advancement of the well-being of citizens.

In this day, which is characterized by grave decline in integrity among public office holders, when leadership is best known for its evil influence on the lives of citizens, an age that breeds villains rather than heroes, patriots must take it upon themselves to identify and encourage any voice of courage in the wilderness of misrule. Much as we condemn evil without reservation, it would be a great injustice if we fail to recognize meritorious service and give honor to whom it is due.

Over the past few years, the Delta State Commissioner for Primary and Secondary Education, Dr. Veronica Ogbuagu made bold and determined efforts to bring some measures of discipline into the Delta State education system and restore sanity to schools.

She started by tackling the twin problem of trading inside the classroom and truancy among teachers both in primary and secondary schools.  Without doubt, the primary school is the foundation of the educational system. Whatever affects the foundation inevitably affects the entire structure.

Dr. Ogbuagu successfully brought an end to the practice whereby some teachers brought such items as bangles, trinkets, pants, egusi (melon) and agbono  (irvingia gabonensis) nuts, also known as African mango, for sale in the school.

She was alarmed that some teachers found time to make regular trips to Dubai, Cotonu, Onitsha and other international markets to carry out their business while remaining on the pay roll of the Unified Teaching Service of Delta State. The problem of widespread truancy among teachers was particularly troubling to this notable educationist.  But Ogbuagu did not merely bemoan these ugly practices. She took bold steps to stem them.

She embarked on sporadic and unscheduled visits to schools, including those located in the most out of the way places, and was able to ‘catch’ a large number of these truants red-handed. “Take for example”, lamented Ogbuagu, “a school that has a staff of 46, you found only 10 on their duty post.” (The Pointer, December 16, 2003, page 2). Her sporadic visits to schools served to deter most of the errant teachers in these respects.

Teachers who were rarely present in class to teach could not be expected to cover the syllabus for the year. And how would teachers expect students to pass examinations set on the basis of topics in syllabuses that were never taught? In such a situation, both students and teachers had a vested interest in examination malpractice.

Dr. Ogbuagu was not satisfied merely to mouth her disapproval of examination malpractice. She went ahead to take firm action.  She ensured that questions were set on the approved scheme for each category of students. Then teachers from different schools swapped in invigilating examinations.

There was hue and cry among corrupt teachers and some school administrators, these agents of destruction of early lives of our children. This was not surprising since we live in a culture of bad examples where most people are addicted to complacency. In the situation, people are tempted to condemn the lone good example as aberrant, even deviant. But Dr. Ogbuagu was unyielding on the path of discipline and probity.

To discourage teachers from awarding marks to children for topics not taught, she went ahead to ensure that teachers did not mark scripts of their own class children. Teachers from other schools marked scripts, based on the marking scheme.

Finally, she set up examination marshals, complete with uniforms and organized workshops and seminars to enable them effectively monitor the implementation of her examination ethics programme.

Heroes of the 4th Republic

We will get a glimpse of the extent of Dr. Ogbuagu’s contribution to the building of a sane Nigerian society if we realize that the school is a training ground, not only of knowledge and skills, but more importantly, of values and attitudes.

It is clear from recent Nigerian history that Dollars and Naira cannot save our country from further decay. We must now be diffident of the efficacy of raw political power to ensure a just and progressive society. Even religion as panacea to human problem has failed as advocate of “political sharia” (apologies to President Olusegun Obasanjo), have made plain for all to see.  But the right kind of education will certainly go a long way.

Dr. Ogbuagu has joined the league of dedicated public office holders,  apostles of transparency and anti-corruption crusaders in the mold of the famous Professor Dora Akunyili of NAFDAC, Alhaji Nuhu Ribadu of EFCC, Mallam Nasir el-Rufai, Minister of Federal Capital Territory and Dr. Mrs. Ngozi Okonjo-Iweala, former Minister of Finance. These are truly leading lights of a new Nigeria. These are the heroes of the 4th Republic.

Before Dr. Ogbuagu’s appointment, most teachers actively contributed to the destruction of valued social standards. Today, the Delta State school system is waking up to join the civilized world in making our schools truly places to prepare our children for a greater tomorrow. Unfortunately, there is as yet no respite in this respect in many departments of the Delta State Public Service.

The importance of citing the case of Dr. Ogbuagu is that Nigeria and indeed Delta State need more of such personalities who would say a decisive “no” to indiscipline and fraudulent machinery in any arm of government.

In spite of brain and brawn, in spite of inestimable resources both human and material, in spite of petro-dollars, as long as Nigeria remains a moral cripple, there is no way it can take a bold leap into greatness.

All said, the future of Nigeria is at stake in what goes on in our primary and secondary schools across the country today.