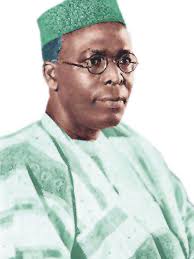 “Every Government of the day must recognise the ultimate purpose of the state – which is the welfare of the entire people without discrimination and having recognised that purpose, to set about making plans for its attainment. But no plan for the welfare of the people will ever succeed unless the very first principle in the pursuit of this ultimate purpose is fully recognised.

“The first principle is that: man is the sole creative and purposive in nature: everything else by comparison is inert.  In all the spheres of production, distribution, exchange and consumption, he is the initiator and accelerator of every form of human progress: he is the generator of every initial impulse to human evolution.

“Any plan for progress therefore, which places man in a secondary place is basically in error, antithetic to the natural order of human endeavours, and is bound to fail, as well as a bane rather than a blessing to the people.

“One of the causes of the disastrous collapse of the First Republic was the failure to recognise the ultimate purpose of the State and the unique and prime status of man within the State.”

If one evaluates President Muhammadu’s policies in the light of the above statement, one is bound to conclude that the President has not presented the country with a plan for the progress of Nigeria and from all indications, he has no intention of doing so.

In his speech broadcast to the country to mark Nigeria’s 60th independence anniversary, the President said nothing about laying foundation for the progress of the country. He concentrated on justifying fuel price hike and empty exhortations about nationalism. No amount of fuel price hike or empty words will develop Nigeria. Only an educated and technologically empowered citizenry can. And the President seems not prepared for that.

Indeed, Nigeria today is in a far worse situation than  it was in the pre-independence period when leaders of the Northern Peoples Congress (NPC) vehemently rejected universal education for all Nigerian children which was presented by Chief Obafemi Awolowo’s party, the Action Group (AG) as the foundation of its plan for the development of the country.  Awolowo therefore had no alternative than to restrict his Universal Primary Education (UPE) to the defunct Western Region (present-day Lagos, Oyo, Ogun, Ondo, Ekiti, Osun, Edo and Delta States). The programme took off on January 17, 1955, when 400,000 six-year old children went to school for the first time. It was revolutionary and unprecedented anywhere in Africa.

In a Message, His Excellency the Governor of Western Region, Sir John D. Rankine, observed:

“The provision of free universal education is an important milestone in the social advance of any nation.  In many countries in the world today, this stage has not yet been reached.  It is not even in sight.”

I say the country was better in 1960 because at that time, federalism was still in practice. This made it possible for the great leader of the Western Region to give a good example in his Region. Today, the country is suffocated by a Central Leviathan that takes total control of affairs, fiscal and programmatic. Unlike 1960, the Federal Government seized all funds and pays a paltry to states, courtesy of Military Decrees by illegitimate military juntas. The Central Government is determined to shoot down all progressive measures taken by Regions and states to advance their well-being. For example, the patriotic initiative taken by South-West to establish a security outfit named AMOTEKUN to protect it from rampaging criminals is stringently opposed by the Federal Government that has proved totally incapable of protecting citizens. It had earlier disrupted a similar and less ambitious Neighbourhood Security Outfit planned by the Rivers State Government to protect its citizens.

If Nigeria had a visionary leader like Awolowo, the present generation of Nigerian youths would have constituted the country’s best social capital asset of gigantic proportions rather than the prevailing state of affairs where leaders lament about youth delinquency and violence. The country is simply reaping what it has sown by refusing to fund technological advancement, which can only be carried out by citizens.

If some sections of the country are determined to live in the past, the leaders of such areas should not hold other regions down. That is the essence of demand for true federalism so that those who want to move forward can do so. Only leaders that lack innovative capacity insist on control of oil money from the Niger Delta. The South-West Region does is not fazed about oil money; their greatest demand is true federalism so that they can move forward unhindered.

The big oil-producing countries of the world are NOT the wealthiest or most advanced. For example, Japan has no raw materials. Even drinking water has to be processed, yet it is a leading economic power in the world because the leaders deliberately and consciously invested in basic, formal and technological education of its people. In the small island nation of Cuba, the late Fidel Castro invested in education of Cubans, producing some of the best doctors, engineers and other professionals in the world in spite of political suffocation from its overbearing neighbour, the United States of America (USA).

At the present time, Nigeria is at the bottom ladder of the Human Capital Index, ranking 152 out of 157 countries evaluated, according to the World Bank.  It is not much of a surprise if the President is constrained by his cultural upbringing which inevitably conditions his world view. What is truly bothersome is that some educated Nigerians are supporting him in his project of taking the country backwards.

In spite of attempts by a long line of military dictators to destroy the foundation which Awolowo laid in Western Region from 1955 onwards, the present generation of Nigerians must still be grateful to this avatar, who pointed the way to rapid and sustained development of an illiterate, backward, post-colonial Third World society.

If Nigerian leaders had hearkened to Awolowo cries for education for all Nigerian children from the 1950s, the country would today be a developed country. Given the discovery of crude oil in commercial quantities at Oloibiri in the defunct Eastern Region by Shell in January 1956, and huge revenues in foreign exchange which accrued to the country from export of the same which started in 1958, Nigeria would clearly have overtaken some of the developed countries of Europe. One Nigerian military dictator that held sway during the oil boom of the 1970s and who is today hailed as a “statesman” reportedly boasted that Nigeria’s problem was not money but how to spend it.

But the Nigerian situation could have been infinitely worse today if not for Awolowo. Imagine what Nigeria would have been if the old Western Region (Lagos, Oyo, Ogun, Ondo, Ekiti, Osun, Edo and Delta States) had all been producing millions of illiterate and desperate “Area Boys” since 1955, to add to sophisticated professional gangsters from some parts of the East to join millions of religious fanatics and another ten million or more street children (Almajirai) in the Northern Area. Imagine the total chaos that Nigeria would have been facing today.

Nigeria is in the happy position that there are still a relatively few sane voices in the wilderness of confusion that has overtaken the country.

What the country needs at the present time is that enlightened minds from all parts of the country and Diaspora must step forward without delay to steer the country away from total disaster which threatens to overtake it. It is human beings that develop the environment.  Nigerian history shows that no amount of money can develop a country. In spite of military dictators that drew the hand of the clock back, the old Western Region still remains a model for the rest of the country. It is still the place where we have some sane voices even though some of their leaders have been acculturated into the exploitative feudal ethos of those that pay them.  God Held Nigeria.